With conclusion of two elections this year already, we untangle the Nepal’s upcoming general elections 2022 and more

Election is around the corner in Nepal once again after the National Assembly election in January 2022 and the recent local government election fever that ended with electing 753 local governments.

The country is now gearing up to choose a new set of federal and provincial assembly members and shape the country’s political and economic future for the next five years. A total of 17,988,570 registered voters (49.1% of them women) will have the opportunity to vote this general election on 20th November to elect 275 members at the House of Representatives and altogether 550 members at seven province assemblies, both of which will be held in one phase.

Once the results are declared, winning candidates obtain their democratic mandate, and new legislatures and governments will be formed at federal and provincial levels.

For this, three levels of elections are held in Nepal — the recently held i) local government elections and the upcoming ii) federal parliamentary elections and iii) election of the provincial assemblies which are happening concurrently this 20th November.

Article 83 of the Constitution of Nepal states that Nepal shall have one Federal Parliament consisting of two houses: the House of Representative (also referred as the lower house) and the National Assembly (upper house) which we understand as a bicameral system. A total of 334 members — 275 members in the lower house and 59 members at the upper house will make up the federal parliament.

The first parliamentary and provincial level elections were held in two phases in 2017 on 26th November and 3rd of December after the new constitution was promulgated in 2015 and two rounds of Constitution Assembly in 2008 and 2012.

Although achieving both elections at once will reduce the costs of election, the ongoing larger focus on lower house election will overshadow the provincial concerns and agendas, depriving voters to make the right judgment.

How is the federal parliament elected?

FPTP — one of the oldest voting systems prevailing all around the world — means each constituency elects one member through direct voting, and the candidate with the most votes in the single round election wins the seat. This means there are 165 constituencies across Nepal which were delineated on the basis of population (1st priority) and geography (2nd priority).

The 165 constituencies were demarcated by the 2017 government based on the report submitted in the same year by the Constituency Delimitation Commission (CDC). Kathmandu has the highest number of constituencies (10), followed by Morang (6), and Jhapa, Rupandehi and Kailali (5 each). Constitutional provision guarantees that the constituencies are non-alterable for the next 20 years (until 2037) or contested in any court of law. 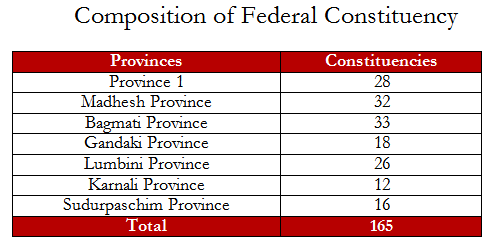 PR is based on party list votes where political parties submit a closed (non-changeable) list of candidates to the Election Commission. Voters will vote for political parties and seats are then distributed by the election authority to each party proportionate to the number of votes the party wins nationwide. This means the entire country is considered a single constituency. Candidates take seats in the order as they appear in the PR list forwarded by their parties.

However, parties must obtain a certain threshold — 3% of the total valid vote casted under the PR category and at least one seat under the FPTP category — to qualify representation in the parliament as ‘national parties’. In case the parties fail to secure the 3% threshold but its candidate wins a seat in the FPTP category, they can represent in the parliament as an non-party individual.

When the combination of FPTP and PR is used, voters cast votes at the same time as each voter has two votes, one for a constituency candidate and one for the PR list. Each voter is provided with two ballots papers for the two methods and the votes are casted.

These members are the representatives from the seven provinces of Nepal, each of which elect eight members through an electoral college and three are nominated by the President on the recommendation of the government.

The electoral college comprises members of the provincial assembly and chairperson/mayor and vice-chairperson/deputy mayor of provincial local units but the weight of their votes differ.

Although the Nov 20 election is not about the National Assembly, the election outcomes of the provincial parliament and the local governments will have bearing on the composition of the assembly later.

The idea behind rotation of members is to have a permanent body, maintain the change of electoral influence and have a stable system.

Provincial Parliament
Voters will also choose their provincial assembly representative this election. Each province parliament has a different number of seats totaling 550 from seven provinces.

The voting system exercised for the unicameral provincial parliament too is based on the mixed electoral voting — 60% of these seats (330) are elected through first-past-the-post (FPTP) and 40% (220) through proportional representation (PR).

The provision has achieved the mandated women representation across the parliaments, but this is mainly achieved by keeping women under the PR roster than fielding women candidates under the FPTP. This election 235 women have registered their candidacies (out of 2,526 candidates which is 10.25 percent) for the House of Representatives and 297 women are competing for provincial assemblies (out of 3,476 candidates, which is just 8.54 percent).

National Assembly
Within the eight members elected by each provinces for the National Assembly, at least three have to be women, one Dalit, and one member with a disability or from a minority group. Three persons including one woman are nominated by the President on the recommendation of the Government of Nepal.

Criticism and advantage of the parallel voting system
When a combination of FPTP and the PR system is used, the PR system negates the shortcomings of the FPTP.

FPTP also favors larger parties who have a history of institutional outreach (like Nepali Congress and CPN (UML)) and regionally concentrated parties (Madhesh based parties like People’s Socialist Party and  Loktantrik Samajbadi Party Nepal) barring smaller parties to penetrate with their ideology and agendas.

Based on the recent local election outcomes, chances are that new parties like media personality Rabi Lamichhane-led Rastriya Swatantra Party may score big, cutting down seats of the larger political parties.

Similarly, PR seats have also proved to be a useful medium for the political parties to ensure women representation as mandated by the laws.

But PR candidates from the big parties are usually compelled to toe along their party lines since they come through reserved seats unlike candidates under FPTP who win their seats.

The essence of the system is to ensure the representation from the marginalised and underrepresented communities but people who have stayed in power for long and have little to show in their report cards, people who are close to power, people with deep pockets and people with vested interests in the parliament are found abusing the system to continue holding the influential lawmaking position.

On the other hand, the parallel system of voting might get a little complex for the voters to understand and comprehend as a system of electoral governance.

What is missing this election?
Absentee Voting
Although Nepal’s economy largely depends on remittance income sent by the foreign labor migrants, there are no provisions to ensure their voting rights. Estimates suggest that around 10-12% of the entire voting population (over 3.5 million Nepalis) is disenfranchised. With no laws to exercise their voting rights, politicians don’t feel the need to heed and address their concerns despite their mammoth contribution to the frail economy

This lack of provision has continued despite the Supreme Court’s directive in 2018 ordering the government to ensure voting rights for Nepalis living abroad for the future election.

‘Right-to-Reject’
A form of protest voting — the ‘none-of-the-above’ (right-to-reject) option in the ballot — allows voters to be expressive about their election candidates. Exercising the right can signify many things — that candidates are obsolete, incompetent, or they are fed up with the constant political bickering at the cost of taxpayers’ money, among others. For political parties, it should mean as a warning that voters can’t be taken for granted anymore.

In 2014, the Supreme Court had directed the government to implement the negative voting right but it is yet to come into force despite another Supreme Court ruling in 2019.

This work is a contribution of Pallavi Maheshwari  &  Sabin Jung Pande. 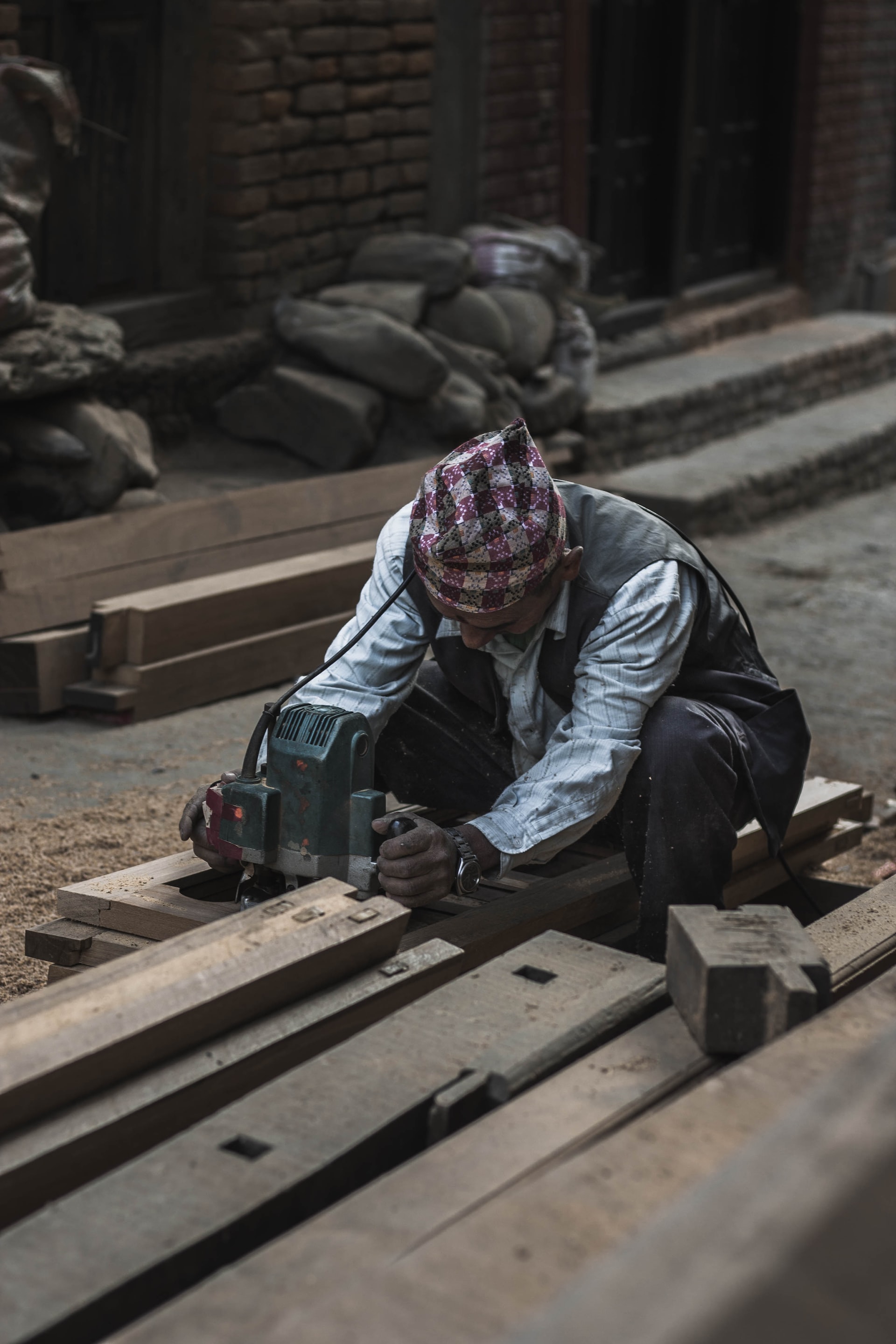