Nepal's sovereign timeframe surpasses all other countries in the region. But, when it comes to the commercial inception of tourism, the nation is just 67-years-old. This sexagenarian tourism age started after the downfall of the familial Rana regime in 1951.

During the 104-year-old authoritarian family regime, Nepal was a hermit state, off-limits to the outside world. Average citizens were politically barred from connecting outside its borders.

Only the ruling elites enjoyed the privilege to tour the world and invite a few foreign folks of their choice to visit Nepal. Commercial tourism was not an idea of their liking until everything changed in 1951.

Death of Rana regime and the birth of tourism
On 18 February 1951, the Rana regime formally collapsed, paving the way for the beginning of the commercial tourism era in the previously forbidden kingdom. In just about four years, in March of 1955, the first batch of international tourists arrived in Nepal. The group of all female tourists including Brazilians and Americans touched down at Gaucharan Airport (the erstwhile name of Tribhuvan International Airport) at 11 in the morning. They arrived on a two-engine Indian Airliner from India, cruising from their respective countries. The tour, operated by Thomas Cook and Sons (founded in Britain, one of the oldest travel companies in the world), guided this batch around Kathmandu’s novelties; its sights and scenes, local dances and cuisine for a total of two days.

The historic arrival of the first tourists in Nepal was reported by the New York Times on 9 March 1955. The headline read, ''Tourism age comes to Nepal'' with the subline reading ''First organized group finds all the usual conveniences except souvenir cards.''

Writer A.M. Rosenthal wrote, ''At 11 am today, the tourist came to Nepal. It arrived, a bit wearily, in the form of ten United States and two Brazilian visitors to this centuries-hidden Hindu kingdom of the Himalayas.'' The news added, ''Only a handful of persons in Nepal were aware of this historic moment in the country's history but that handful was having pleasant thoughts when a two-engined Indian airliner touched down at the airstrip a few rocky miles from town.''

With a distinct Western perspective of Nepal's touristic impression and activities, the news further read, ''Kathmandu is as untouristy as any tourist would want. There are a few scores cars in town and even a half dozen traffic cops. But Kathmandu is still fifteenth-century. Using beasts for carrying burdens is considered irreligious. Loads are still carried in the approved manner, slung from a strap around a human head. Every valley has its temple and every temple has its offering outside. For the tourist - they will stay two days and another group will arrive Thursday - a Nepalese version of a nightclub show has been arranged, at 9 PM tomorrow the devil dancers will perform.''

This first arrival was not an easy task. The first hotelier in Nepal, Boris Lissanevtich, had to persuade the newly crowned King Mahendra for his royal nod of approval to move forward with his plans to fill his hotel. But Lissanevitch was not an average businessman. An exiled Russian ballet dancer turned restaurant pioneer, Lissanevitch shared a close friendship with King Tribhuvan after meeting him at Club 300, Boris’s exclusive club for Indian, British and foreign elites based in Calcutta.

Leveraging this connection, Boris had established Nepal's first tourist-standard hotel named 'Royal Hotel' in 1955 at Kathmandu in collaboration with prince Bashundhara. The iconic 40-bed hotel was located in what stands today as the Election Commission Office in Kathmandu.

It is considered that it was Boris’s constant efforts that led Nepal to issue tourist visas from 1955. Boris’s life is detailed in the biographical book of Boris titled 'Tiger for Breakfast' written by Michel Peissel in 1966.

During the premiership of Mohan Shumsher, the last Rana PM (1948-51), Nepal permitted a French expedition team to climb either Dhaulagiri or Annapurna. After an unsuccessful attempt at Dhaulagiri, the French team ascended the top of the Annapurna on 3 June 1950. In recorded human history, this was the first time for anyone to have scaled a mountain over 8,000 metres.

The 8,091-metre Annapurna ascent put Nepal as the premier destination on the world adventure map. Even those who had never heard about Nepal got to know about the little-known nation.

The accounts of the Annapurna ascent authored by team leader Maurice Horzog titled 'Annapurna' sold 11 million copies by 2000, a report of New York Times show. France 24, a French news channel reported the iconic 'Annapurna' book was translated into 40 different languages across the world. 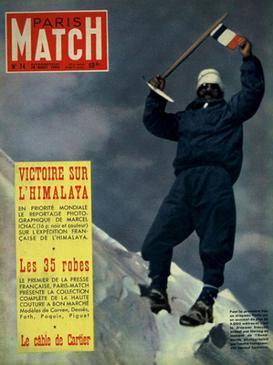 Within three years of the Annapurna success, Nepal-born Tenzing Norgay and New Zealander Edmund Hillary summited Everest on 29 May 1953.

Besides Annapurna and Everest, Nepal hosts six other world’s 10 tallest peaks (Kanchenjunga, Lhotse, Makalu, Cho Oyu, Manaslu, Dhauraligi) of world's top ten mountains. Nepal is, in fact, home to the largest number of mountains above 8,000m in the world — 14 mountains.

These towering giants are the stewards of Nepal's brand in the world of tourism adventures while mountaineering became the greatest catalyst of Nepal's international tourism boom. Nepal’s status as a destination for tourism continues to rest upon the shoulders of the Himalayas.

According to an analytical report on tourism, the tourism industry contribution to the national economy (GDP) was 6.7% in 2019 and 6.9% in the country’s employment. The Nepal Tourism Statistics 2019 shows that tourism generated foreign earnings of $724 million while earning Rs 568 million in royalty from mountaineering expedition alone.

Nepal's lethargic march towards institutionalisation and data
Nepal’s tourism sector shows poor track record in the institutionalisation and date maintenance. For example, Nepal only started counting its tourist arrival in 1964 (when 9,526 tourists arrived in Nepal). Nepal started to issue tourist visas from 1955 but began counting the number of tourist arrivals nearly a decade later. Interestingly, recording of the length of stay started in 1973.

In 1975, Nepal became a member of the World Tourism Organization whereas the tourism ministry was established in 1978. The Nepal Tourism Board was constituted two decades later in 1998 (which now produces annual tourism statistics).

As of now, Nepal has celebrated three ‘tourism year' campaigns in 1998, 2011 and 2020. However, the campaigns were hardly successful.

The Visit Year 1998 campaign with the slogan 'A World of Its Own' sought to enhance Nepal’s image as a special destination for international visitors but Nepal was marred in an armed conflict at the time.

The 2011 campaign had the slogan 'Together for Tourism' and aimed at attracting one million tourists to Nepal. Only 736,215 tourists arrived that year.

Nepal's latest visit year 2020 was scheduled with the tagline 'Nepal: Lifetime Experiences' and targeted two million tourists but was ravaged by the COVID-19 pandemic with only 230,085 arriving during the year.

Birat Anupam is a reporter at National News Agency of Nepal (RSS) and Nepal Press.